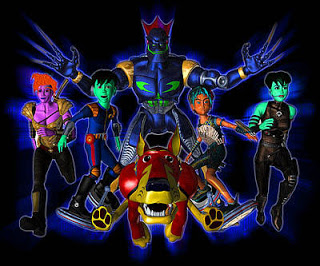 This post is a continuation of the post ReBoot: A CGI Allegory for Millennial Mainframers (Part 1).
Where we last left off, our Millennial Mainframer hero Bob the Guardian met with his mentor Phong to figure out how to protect Mainframe from the evil computer virus MegaByte. Phong advised Bob the following:

“There is an old README file that says you should keep your friends close and your enemies even closer… I’ve seen that look on young sprites before. Don’t be rash, and don’t do anything alone! Here in Mainframe, we stick together.”

If you stopped the episode as advised in the first post, please resume this video at 9:36.

Despite telling Phong that he would adhere to the mainframe mentality and “go back and talk to the others,” Bob immediately left to see MegaByte and “keep [his] enemies even closer.” Bob therefore lied to Phong, demonstrating that he hadn’t yet internalized the mainframe mentality of trust and cooperation. Perceiving himself as the fastest and most skilled individual in Mainframe, Bob sought to deal with MegaByte alone, assuming that cooperation with older Mainframers would slow him down or risk failure due to their “low clock speed.” Like young professionals in any field, we Millennial Mainframers run the risk of forming false preconceptions that their older colleagues are slow and inflexible, holding us back and biding their time until retirement. It is critical that we debunk these preconceptions and respect our elders in order to benefit from their mentorship and lessons learned.

When Bob got to MegaByte’s lair, he told MegaByte “I see that you’re the big circuit in town… I’ll throw my chips in with you.” Oftentimes, young people seek to “throw their chips in with” the biggest players and hottest technologies. This is shown by the popularity of mobile development in universities, the usage of new development tools like Python and Ruby on Rails, and the prevalence of books like Are You Smart Enough to Work at Google? By going after “the big circuit in town,” many young people fail to improve their competitive advantage by positioning themselves in a market niche where their knowledge, skills, and abilities shine brighter than the competition. This principle is why the decision to become a Millennial Mainframer can be so lucrative.

After making his way into MegaByte’s lair and witnessing his droid army firsthand, Bob finally learns the truth of MegaByte’s “little favor.” MegaByte wants Bob to “stabilize this tear into a portal” to let MegaByte and his army cross the network into the Super Computer. Often times, internal users of a computer environment have limited network authorization in line with an organization’s information security policy. Like MegaByte, many users many complain about specific ports being closed and their inability to access special resources. Occasionally, administrators may receive requests for “little favors” that violate organizational guidelines, like opening ports on the firewall to allow for access to torrent sites. Both Guardians and Admins must consider these requests extremely dangerous due to the possibility that they could open the door for unanticipated consequences and malicious behavior, such as letting a virus into the Super Computer.

Despite MegaByte’s false flattery and empty promise that “I won’t disappoint you,” Bob saw through the ruse, asking MegaByte “what guarantee do I have that you won’t just spread to the Super Computer and raid the Armory.” Unfortunately, he did not have the foresight to prepare for MegaByte’s Plan B: holding Bob hostage to force his way into the Super Computer using the threat of deletion. Because Bob failed to adopt a mainframe mentality and heed Phong’s advice that “in Mainframe, we stick together,” he opened the door for MegaByte to gain access to the Super Computer. Thankfully, Phong sensed that Bob “must be at MegaByte’s alone,” enabling Dot to come to Bob’s rescue. Dot’s diversion and rescue of Bob demonstrates the importance of teamwork among Mainframers, even when that involves bailing out a colleague from a situation caused by their poor judgement. While Bob’s attitude of individual initiative and “making [it] up as [he] goes along” imperiled himself and the Mainframe, Dot’s attitude of teamwork and well thought-out plans saved them both.

Just when Bob and Dot thought their were finished with MegaByte, the user targeted their local sector for a game. This shows that the chaos caused by a Virus can increase the vulnerability of a system to other threats. Within the game, MegaByte quickly hijacked the user’s account to gain network authentication to the Super Computer, forcing Bob and the other Mainframers to intercept him before reaching the portal.

Having finally internalized the importance of teamwork in a mainframe environment, Bob rallied the Mainframers to man their starfighters, “stay frosty,” and follow his lead to intercept MegaByte. By showing his willingness to take point and put himself in the most dangerous position in Alpha Squadron’s formation, Bob was able to rally the Mainframers despite his past mistakes. This paid off when Dot warned Bob to “look out!” when he was in danger of crashing into an Asteroid. Regardless of one’s technical aptitude, it is critical to have a good Wingman covering your back. In return, Bob showed his willingness to be a good Wingman by covering Dot when she radioed “cover me! I think I’ve got a shot.” Rather than trying to be a hot shot by going after the capital ship himself, Bob fell in behind Dot as her Wingman to let her take the glory, and showed genuine appreciation and gratitude for Dot by saying “cool shot.” Oftentimes, sharing the credit will get you further in the long run.

“When our assists lead to baskets, that’s us playing our best, and we begin knocking down shots” ~ Tim Duncan, San Antonio Spurs

Once Bob was open to accepting help from the other Mainframers and working together as Wingmen, he was equipped to stop MegaByte. Dot warned Bob when MegaByte pulled a tricky maneuver to get on his tail, allowing him to destroy MegaByte’s ship. Dot also distracted MegaByte long enough to allow Bob to slip past him and close the portal. In return, Bob was able to use some of the “tricks” he earned from his experiences on the Super Computer to rescue Dot from MegaByte. Due to our myriad experiences studying x86 computer concepts in school, we Millennial Mainframers often have specialized expertise (in concepts such as Linux or Java) that is foreign to the average Mainframer. These “tricks” allow us a means to add immediate value to our teams (and occasionally save our older peers’ butts as Bob did with Dot).

By working together with his fellow Mainframers to defeat MegaByte, Bob internalized the mainframe mentality. Although MegaByte will clearly remain a threat in the future, Bob rests easy knowing that “when he messes with one of us, he messes with all of us.” Even though the Super Computer has “lots of RAM, incredible capacity, and.. can access almost anything,” Bob realizes that “it sure is good to be home” in Mainframe. After all, the value of the Mainframe is ultimately not in the processors, RAS characteristics, parallel sysplex, or any other hardware or software concepts. The value of the Mainframe lies in the discipline, planning and cooperative spirit of the Mainframers.