If you’re a millennial like me, there is a significant chance that you saw the show “ReBoot” during your childhood. Due to it’s status as the first full-length cartoon to be fully computerized, this show was quite popular during its run from 1994 until 2001. When the first episode aired to American audiences in October of 1994, the show broke records and overtook Sonic the Hedgehog as the most-watched children’s cartoon. Despite great expense, technical snags, and production delays, ReBoot demonstrated the viability of computer-generated imagery (CGI) for visual storytelling, encouraging the subsequent production of the Transformers: Beast Wars cartoon and Disney’s blockbuster Toy Story in 1995.

While ReBoot offered cool cutting-edge graphics and fun technospeak for the first children to grow up “digitally native” (and many of their parents), there is a high likelihood that the subtext of the show went over the heads of most of it’s audience. Since joining IBM and becoming a Millennial Mainframer, I had the chance to rewatch the first episode of ReBoot, whereupon I made a starting discovery:

ReBoot is an allegory for success as a Millennial Mainframer!!!!

Allegory is a device used to present an idea, principle or meaning, which can be presented in literary form, such as a poem or novel, in musical form, such as composition or lyric, or in visual form, such as in painting or drawing. It is also seen in scriptural passage. Allegory communicates its message by means of symbolic figures, actions or symbolic representation. Allegory is generally treated as a figure of rhetoric; a rhetorical allegory is a demonstrative form of representation conveying meaning other than the words that are spoken.

This means that the characters and story lines of ReBoot are symbols used to convey the message of how to be successful as a Millennial Mainframer.

You don’t believe me??? Then watch this video and read my analysis below. Note: Stop the video at 9:36 if you want to keep pace with this blog. The remainder of the analysis will be posted next week on May 14, 2012.

I argue that the protagonist Bob is the archetype for the modern Millennial Mainframer.

In the opening scene of ReBoot, we hear the voice of Bob saying the following:

“I come from the net, through systems, peoples, and cities to this place… Mainframe.
My format… guardian, to mend and defend,to defend my new-found friends, their hopes and dreams, to defend them from their enemies”

Throughout the episode, Bob makes it very clear that he is new to the mainframe, reflected in the fact that he calls himself “the new Sprite in town” early in the episode and later sweet-talks his way into Megabyte’s evil lair by saying “not being from Mainframe, you’ll have to forgive me.”
Doesn’t this sound just like us, fellow Millennial Mainframers??? We may not be “sprites,” but we’re certainly new to the mainframe. Like Bob, we came “from the net, through systems, peoples, and cities to this place… Mainframe.” Many of us came to the mainframe with significant experience on the ‘net using non-mainframe systems, and traveling to various cities to study IT concepts under people that as-likely-as-not consider the mainframe to be ‘extinct.’
Furthermore, we’re not typical 3270-lovin’ mainframers like our older peers. Many of us prefer modern GUIs over “green-screens.” If you watched the episode closely, you may have noticed that Bob is blue-skinned, while some of the more established Mainframers, like Dot Matrix, are green-skinned. Does this remind you of anything? 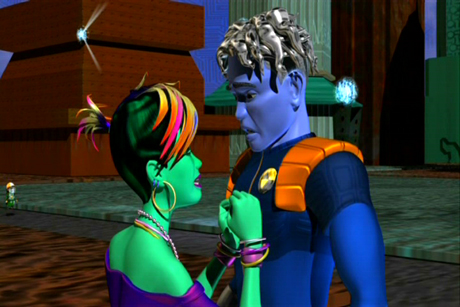 In this light, the narrative of the first episode of ReBoot was a “coming-of-age” story, where the new-comer to Mainframe, Bob, defeated MegaByte by embracing his fellow Mainframers and adopting the mainframe mentality.
Upon first arriving at Mainframe, Bob was a hot-shot. Reflecting his past experiences at Super Computer, Bob derisively said “Low clock speed or what..” when he outran Mainframers Hack and Slash. This reflects the fact that many IT professionals from other platforms make mistaken assumptions about the mainframe being slow and outdated.
Bob soon discovered that, like in many IT shops, the Mainframe environment in ReBoot threatened by a key stakeholder committed to the platform’s complete destruction. In ReBoot, this is MegaByte, a power-hungry and ambitious “virus” that openly threatens Bob’s friends if he doesn’t agree to do him “a little favor.” Of course, that favor is to help him get off the mainframe and move to the super computer. Many naive CIOs believe, like MegaByte, that shifting workloads off the mainframe to a more “modern” platform will solve all of their problems.
The morning after refusing MegaByte, Bob’s casual morning routine was interrupted by a frantic call for help. Dot’s Diner was “down,” which was a disaster considering the criticality of workloads on the mainframe. Bob discovers that, unlike other platforms, the mainframe has expectations of zero downtime. Upon arriving at Dot’s Diner, Bob discovers that the downtime is due to a security breach. The dog, Frisket, was defending the door of the Diner, but hackers circumvented this security system through non-traditional and unanticipated entry points into the system (breaking through the window). Like other administrators of multiuser computer systems, Dot failed to secure undetected backdoors.

After learning from Dot, Enzo, and the Dedicated Server that MegaByte’s goons were responsible for the attack, Bob admitted that this downtime was retaliation for his refusal to do MegaByte “a little favor.” In response, the Dedicated Server suggested “Just a little favor huh, maybe you should do it if it means we can stay online,” reflecting two common mistakes in the running of IT organizations:
When Bob called MegaByte‘s attack “my problem” and offered to deal with him by himself, Dot countered that “it’s everybody’s problem… This isn’t the supercomputer, around here, we Mainframers stick together…” This disagreement identifies the key difference of mainframe environments from other platforms. While someone else’s workloads running on someone else’s dedicated servers can be someone else’s problem, the shared architecture of the mainframe requires mainframers to think communally and act as a team.
Nevertheless, Bob continued to believe that he could single-handedly be the messiah of Mainframe. It was only when his attempt at working alone led to the loss of a “game” and the nullification of an entire sector that Bob finally realized he couldn’t handle the threat alone. Hurt and confused, Bob turned to Phong, a wise and experienced Mainframer, for advice. As Millennial Mainframers, it is critical that we find experienced mainframe gurus to mentor us in the ways of the mainframe mentality. Only mentors can advise us in how to deal with significant organizational or technical challenges, like the threat of workloads moving off the mainframe. After proving himself “worthy” of Phong’s advice (something that most IT professionals must do to earn the trust and respect of potential mentors), Phong told Bob the following:

“There is an old README file that says you should keep your friends close and your enemies even closer… I’ve seen that look on young sprites before. Don’t be rash, and don’t do anything alone! Here in Mainframe, we stick together.”

Bob thus learns that the key to defeating the ongoing threat to Mainframe is by listening to his Zen-like mentor Phong, working together with the other Mainframers, and adopting the mainframe mentality.

Will Bob follow Phong’s advice? Will Bob and Dot Matrix defeat MegaByte and save Mainframe? Tune in next week on May 14, 2012 to find out. In the meantime, let’s hear your comments.