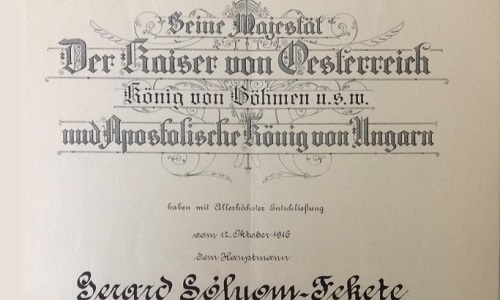 Many of you know that I've had already had a handful of careers during my 27.5 years of life. Besides working in technology and serving in the Army, there was a brief period when I was a History PhD at Georgetown University. At that point in my life, I hoped to become a professional historian and university professor. My research interests were largely focused around 20th century European History. One of the coolest aspects of being a historian is doing original documentary research. While working as a research assistant for Dr. Fariboz Mokhtari, I had the chance to spend a fair amount of time at the National Archives looking through the Captured German Documents collection, where I discovered a number of documents on Abdol-Hossein Sardari, an Iranian diplomat that worked to save Jews from the Holocaust by arguing that they were racial Iranian. By finding and translating these documents, I was able to help Dr. Mokhtari craft the narrative of the book In the Lion's Shadow.

Since leaving the History PhD, I have had to become more creative in finding activities to appeal to my inner "document sleuth." One of these activities has been family genealogy, and I've gradually been able to uncover quite a bit of interesting information about my ancestors. Unfortunately, after a while, genealogy hits the ceiling of what's possible. One runs out of censuses or discovers that family documents were destroyed in a fire or a world war. Oftentimes, a family historian can track family members back to immigration papers to the United States, but is unable to discover leads on family history in the "Old World." For the most part, I've hit that limit with my ancestors. Thankfully, being married gives me a whole new branch of the family to research!

My wife's family is actually quite interesting. My mother-in-law and her ancestors are ethnically Hungarian. The Kober and Sólyom Fekete families were well-to-do Budapest families that experienced quite a bit of interesting history. They appear to have thrived under the Austro-Hungarian Empire, serving in the military, in law, and other professions. They even had ancestral lands in Transylvania. Family member experienced World War I, the collapse of the Austro-Hungarian Empire, the rise of the 1919 Béla Kun Soviet Republic, the counter-revolution of Admiral Miklós Horthy, World War II, the Holocaust, and the Stalinist Era of being a Soviet satellite. Erica's grandparents, mother, and uncle fled Hungary after the failed Hungarian Uprising of 1956 and emigrated to Argentina, where they lived until eventually moving to the United States in the 1970s.

Due to the destruction of Hungary during the 20th century, genealogical research in that country seems to be quite difficult. That is even more true for mere mortals like me that are unable to read or understand the Magyar language. Thankfully, my wife's family was lucky and able to preserve a large number of family documents. Until recently, these documents were held by Erica's grandmother, but as of a few weeks ago, they are now sitting in my home office. The reasons for my assumption of the role of family history are myriad. Mostly, the logic is that I am quite interested in 20th Century European History, and I have some experience doing documentary research. Also, there is the advantage that I can read and translate German language documents. Due to the Austro-Hungarian Empire, German was the "court language" until 1918. About one third of the documents are in German, and the other two thirds are in Hungarian.

Over the next year, I'm going to work to gradually scan and translate these documents. My intention is to make the documents publicly available to researchers, family historians, and anyone else that may be curious. I'm also planning to link the documents to my family tree on Ancestry.com.

Here is a document to give you an idea of what I have: 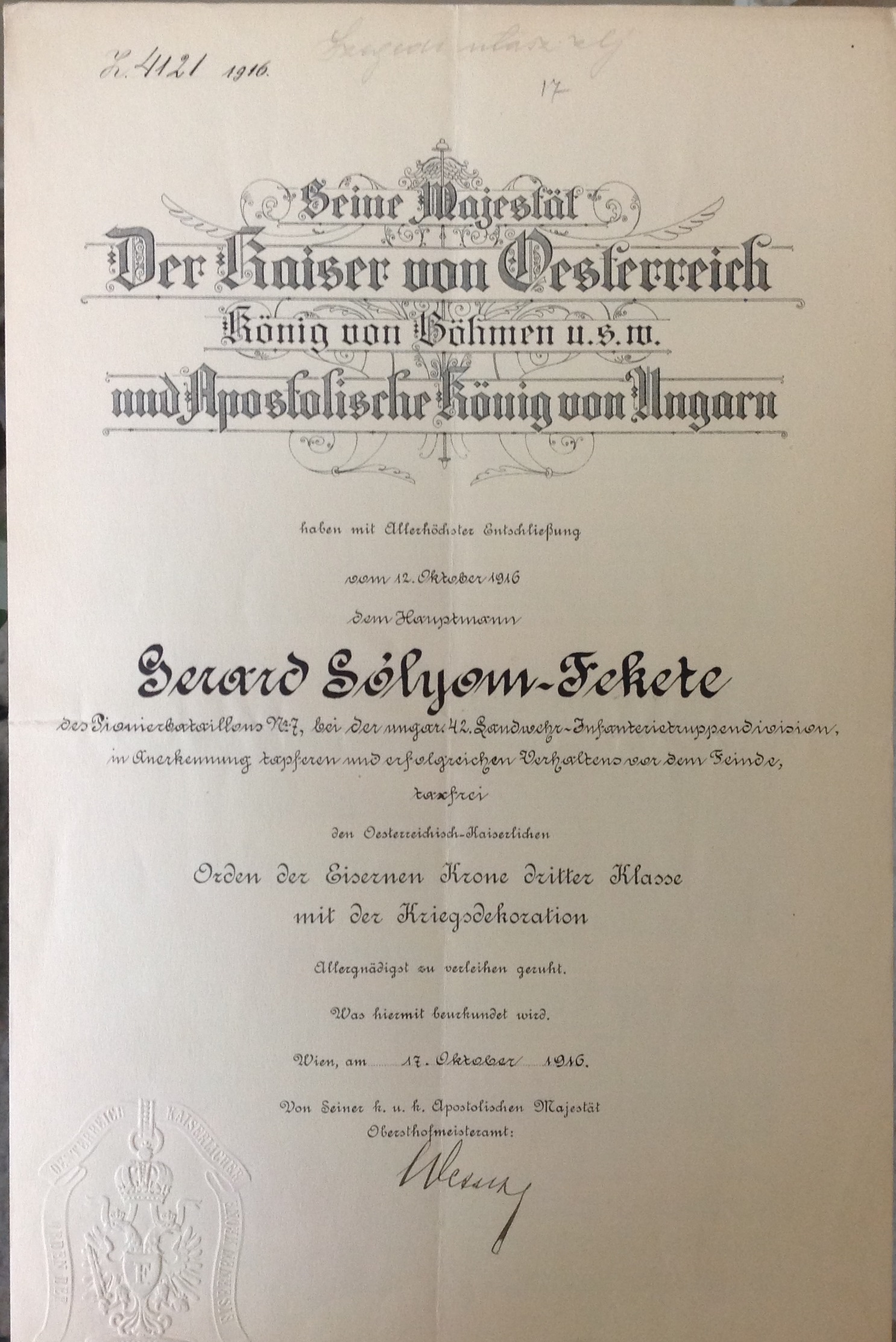 This document is a certificate dated October 17, 1916 awarding Hauptmann (Captain) Gerard Sólyom Fekete of the 7th Sapper Company of the 42nd Infantry Division the Order of the Iron Crown - Third Class (with War Decoration). I'm guessing that the modern American equivalent of this award would be the Bronze Star with V Device. The top of the certificate says "His Majesty, the Kaiser of Austria, King of Bohemia etc., and Apostolic King of Hungary."

Stay tuned for more work on this! I'm looking forward to putting together a coherent narrative from these resources.