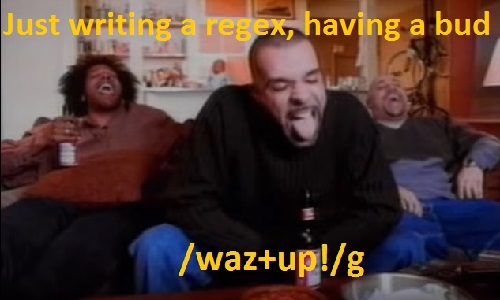 After the first week of my junior phase at Fullstack Academy, it's clear to me that Regular Expressions is a concept that I need to master quickly. In the past, I've usually performed string manipulation through verbose and brute-force if/else logic. This approach does not work cleaning in succint functional styles of writing JavaScript. This content is derived from notes I took during the CodeSchool course I link at the bottom of this page and experimentation that I performed on RegEx101.com. While these materials are primarily intended to serve as a personal reference, I've posed them to my blog in case they might help others.

A regular expression literal is a string of characters.

For example, if you wanted to match the word "boat," you could use the following regex

Sometimes, a regular expression literal may have an unknown number of characters, like when you're just watching the game and having a Bud, and your friend calls.

A regular expression literal can match multiple word by including white space in the literal.

This can be done with a space

Or with a special control metacharacter \s\ that matches spaces, tables, and newlines

In addition to matching a "boat" or "ship," a Regex evaluates to true if it is a valid substring of a string. This is often called "a partial match."

/boat|ship/ true for "battleship" or "rowboat" or "boatswain" or "shipping"

Often this is an undesired behavior.

To explicitly only match full matches and ignore partial matches, you can use anchor characters:

This matches a single character against a permissable range of characters in a regex.

A character set followed by a + operator matches any number of consecutive characters that are witin the permissable range fo the character set.

Multiple ranges can be placed in a single character set

And things like whitespace can also be added to a character set to match uppercase or lowercase letters or spaces.

/\w\s/ //true for uppercase or lowercase letters from a to z, numbers from 0 to 9, or whitespace.

Inside of a character set, the ^ also assumes a different meaning. Instead of acting as an achor, it acts as a NOT operator

/^[^m]$/ //true for any single character other than lowercase m

Special modifier characters can be placed after the trailing slash of a regex to affect how they are evaluated.

For example, the last regex matching both lowercase and uppercase letters can be simplified with the casing modifier i that makes the evaluation of the regex case insensitive.

Note that modifiers are language specific, so double check the syntax for these using your language

If you want to literally match a character that is used as a special or metacharacter, you can escape the character with a backslash.

Earlier, we saw that the + symbol matches a pattern against (1-n) characters until reaching a non-matching character.

In a range, min and max are optional values

Normally, a regex will match once on the first match in a string. The g global modifier will ensure that the regex matches as many times as possible.

Additionally, in a multi-line situation, the ^ and $ anchor characters search for a strict match regardless of newline control characters. Often in lists of values, we need to be able to test for matches on a line-by-line basis. This is accomoplished by the m global modifier, which evaluates the anchor characters in a multiline environment (line-by-line).

For example, you might have a multiline string that lists different files and file extensions

In this situation, we could use a regex to match all of the *.js files

Most operating systems represent NEWLINE using the \n control character. However, this is not universal.

Wrapping a portion of a regex with paranthesis creates a match group that is returned at the evaluation of the regex. Match groups can even be nested inside of other match groups.

If you are using capture groups, you need to mark all uses of paratheses that are used to logically group operands like OR. This is done by appending ?: at the start of the inner string of the paranthesis.