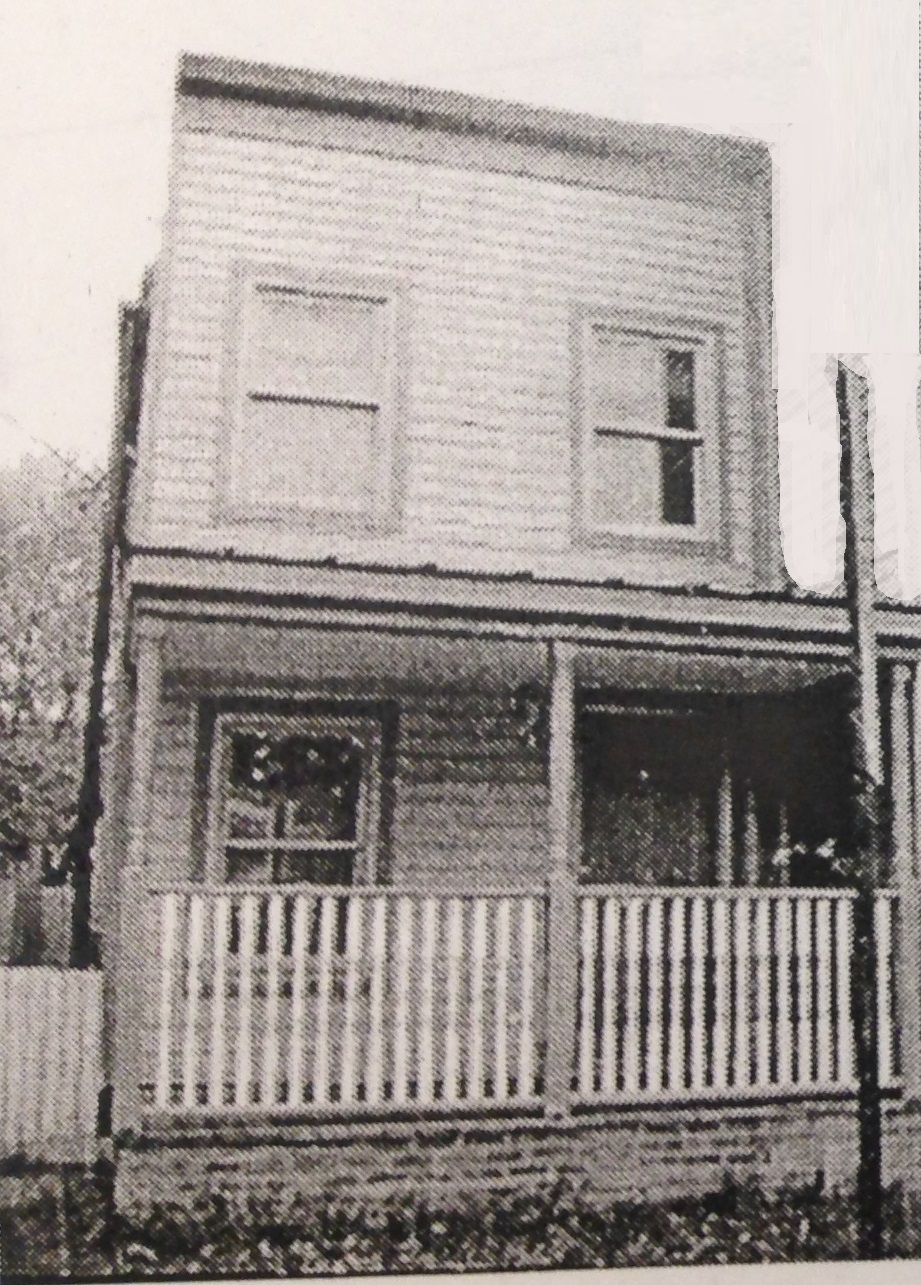 Shortly before Christmas of 2014, my wife and I purchased a lovely townhouse in Alexandria City's Parker Gray Historic District. More specifically, we purchased a house on Princess Street, which my wife loves to no end. Finally she can be a Virginia Princess! The home has been great so far. We're three blocks from King Street, an eight minute walk to Braddock Road, and close to all sorts of Hipsterish new restaurants popping up to our north. Not bad for a starter home on a VA Loan!

According to RedFin and other real estate resources, we understood that the house was built in 1920, which placed the home in the more stringent pre-1930 category of homes. We're not subject to the much more stringent restrictions of homes in the adjacent Old Town Historic District, but we do have some basic restrictions like only having wooden siding and windows on the front of the house, and vinyl windows of any kind being STRENGLICH VERBOTEN.

At the time, we thought that living in a 95 year old home was pretty cool. It's not nearly as old as the 18th Century homes where General Braddock guzzled Sherry and played beer pong with his BFFs before rolling out to Pittsburgh and getting capped by a French dude, but hey, we could have a KICK ASS centennial party. :) Plus, Parker Gray is one of the more famous historically black neighborhoods... sort of like a 19th century Harlem built by Freedmen and responsible for producing some pretty successful folks. Even cooler, Parker Gray is historically known as Uptown, so you know that they know how to funk you up.

Umm, hi, I bought a house in Parker Gray and I wanna see if you have any historical documents on it.

The librarian kindly informed me that sometimes that have info and sometimes there's nothing, but he suggested starting out be looking at the Board of Architectural Review (BAR) files for Princess Street. He handed me a thick folder, and I walked over to a table to slowly thumb through the files. 800 Princess? Nope. 1020 Princess? No 1204 Princess? Bingo!

The 1 1/2-story Italianate residence at 1204 Princess Street was erected in 1881 or 1882 possibly by the first owner, Benjamin Williams, a laborer. On inspection of the interior, however, it appears that the framing is older, probably ca. 1850, which suggests that the building was actually moved ca. 1882. The roof has also been raised approximately one foot. The house is rare in Alexandria in that it has a false front which conceals its modest height and a front facing gable. This form can be seen in several other locations in the historic districts, but more typically on double houses with the gable spanning both units, as at 908 and 910 Princess Street. A front porch was added during the 1920s or 1930s and repaired or replaced several times since. There is a good chance that the house retains some original wood siding beneath the 1970 asphalt "simulated stone" siding. The primary facade's siding was probably all replaced in 1957, but the rest may have only been repaired periodically. Also in 1957, wood shingles were removed, and the roof was clad with asphalt shingles. All of the windows have been replaced.

Even in the Parker Gray District, which is characterized by modest building stock, the house at 1204 Princess Street is unusual for its small size (809 square feet including the porch). Houses of similar or even lesser size were once much more prevalent in both the parker Gray and Old and Historic Alexandria Districts, serving to house many on the lowest end of the economic scale, but as redevelopment occurred over time, they have largely disappeared.

Ummm... My house is 165 years and WAS MOVED? How did people even do that in the 19th century? Plus, where did the house MOVE FROM?

Low and behold, Benjamin Williams appears in the house in the 1881 Alexandria City Directory. Notice that they didn't yet have street numbers. It's labeled as the fifth house on the south side of the street walking east from Payne Street. 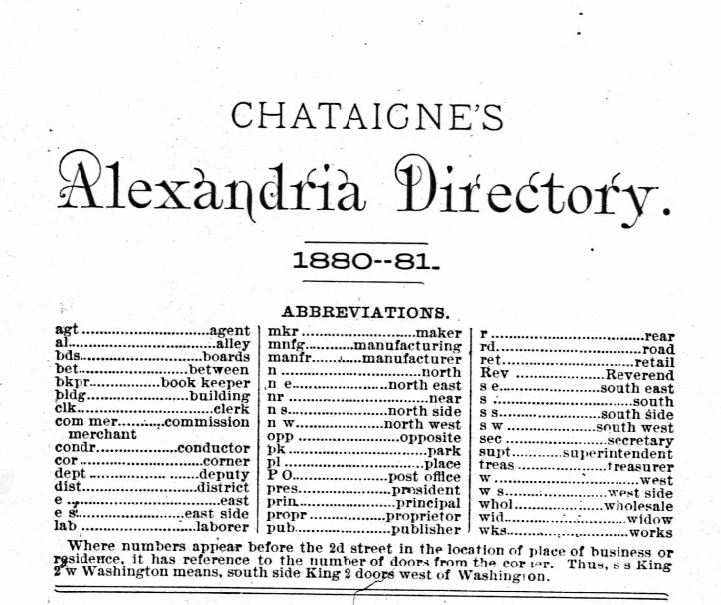 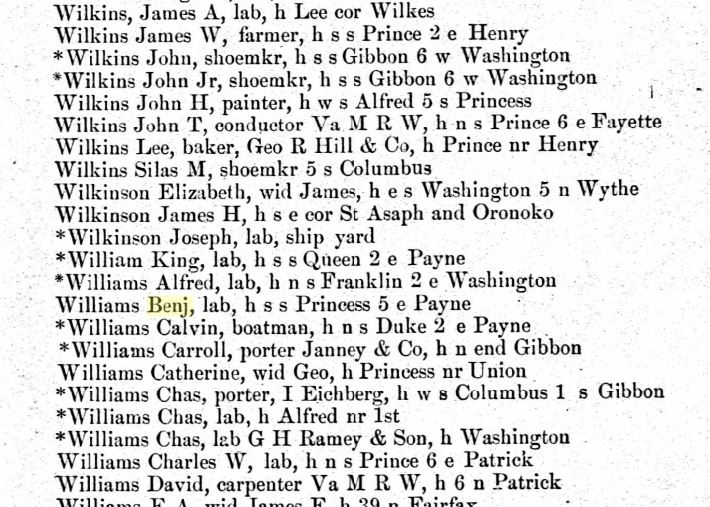 This is further confirmed by looking at the Sanborn Fire Insurance Maps, which verify that Benjamin William's home became 1204 Princess when Alexandria City adopted street numbers. 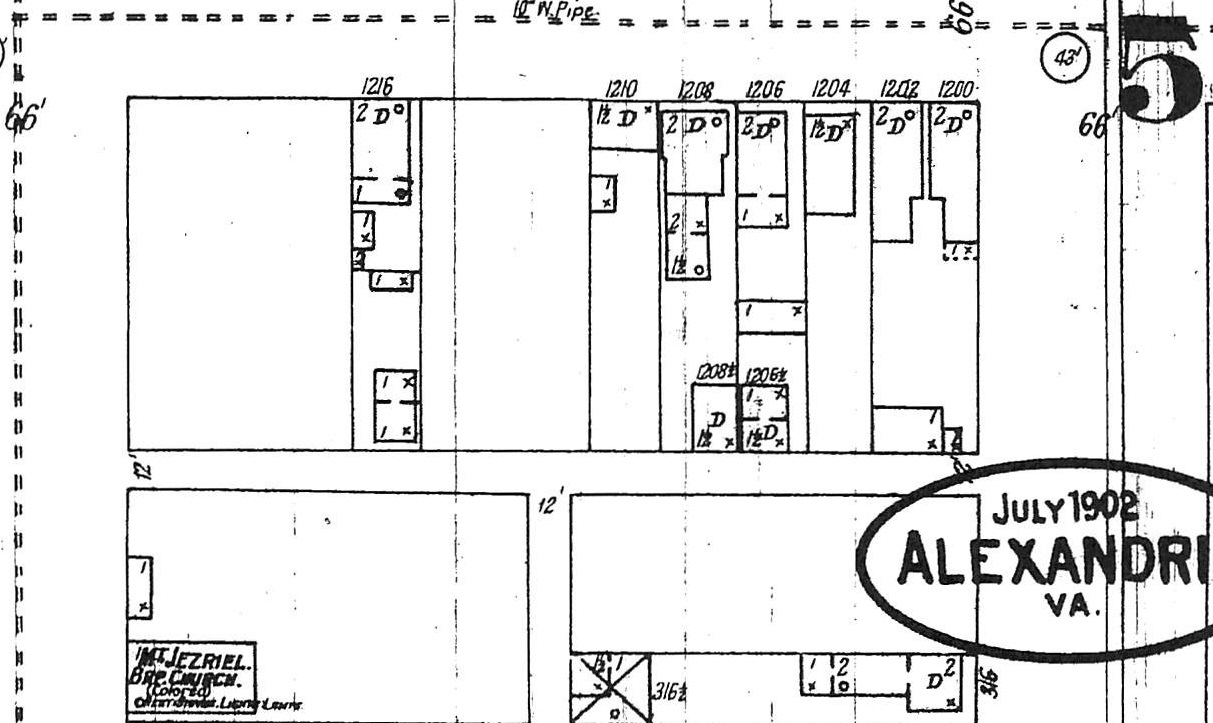 Ancestry also found a record in the African American Civil War Sailor Index for a Benjamin Williams born in Norfolk, Virginia in 1820 that enlisted in the Navy out of Portsmouth, NH on September 8th, 1864. Based on the number of folks named Benjamin Williams in the 19th century, it seems that this might just be coincidence. However, Alexandria's status as a port town and Union logistical hub during the Civil War makes me think that this might be the same person that eventually settled at 1204 Princess Street.

I'm looking forward to digging more into the historical records to learn more about the history of my home and its previous residents. Stay tuned for future reports!