How I got here: Chapter 2

As I've gotten older and gained perspective on my life, I've concluded that many aspects of my personality and career have been broadly shaped by the era, location, and community of my childhood. In this blog series, "How I got Here," I plan to retrospect on a few different periods of my life and some of their lasting influences on my professional pursuits and hobbies.

In chapter one, I discussed the unlikely series of events that allowed me to tour a large Silicon Valley tech firm in 1993, where I learned about the world wide web for the first time. This chapter covers the subsequent two years, when I became obsessed and relentlessly campaigned for a home computer, leading me to build my own PC shortly after the release of Windows 95.

Chapter 2: It takes a village

After getting exposed to computers and the world wide web at Amdahl, I became ravenous to learn more. I went to the local library and began reading random books from the computer section. I'd thumb through a book, say a primer on TurboPascal, trying to absorb what I could before picking up the next book on the shelf. While there, I'd also sign up for a fifteen minute block on the orange monochrome terminals. Most people used these systems to find books, but I discovered a program called lynx that let me surf the web. The only problem was that these terminals didn't have a mouse, so my left pinky finger would get sore tabbing through web pages.

Around this time, my Opa, Richard Grokenberger, taught me to use MS-DOS. Before long, I discovered a program on his computer called WOLF3D.EXE. My mom was concerned that this game was too violent, but Opa insisted that it was fine. After all, I was shooting digital nazis. 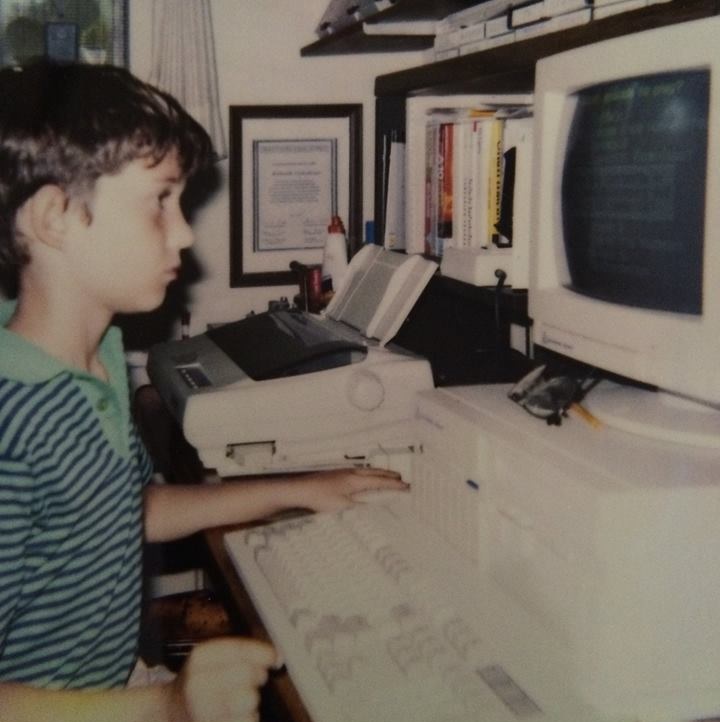 Folks at my church later took an interest in my hobby, and they started donating old computers from their attics and basements to create a computer lab that I could tinker with. This gave me access to an original IBM PC, a Compaq laptop, a Commodore, and an Apple ][. I usually spent my time writing small programs in BASIC, but I figured out that it was a good idea to keep a piece of religious software, such as the game Bible Adventures, loaded on one of the computers to make sure I looked like a studious Christian whenever the pastor came by.

These occasional computational dopamine squirts were great, but I had become an addict, which made one thing crystal clear:

I needed a computer at home.

The problem was that, compared to some of my friends, my family was financially hard-up after my dad got injured at the Mare Island Naval Shipyard. A home computer was a serious luxury good, and we just couldn't muster the resources for it. One day, I walked in and saw a bunch of distinctive cowprint boxes filled with Gateway computers. I thought Christmas had arrived early. Only later, I learned that these boxes were part of one of my dad's rebate/resell side hustles, and we wouldn't be keeping a single computer.

Seeing that I was crestfallen, my dad took pity on me and suggested that, rather than using a pre-assembled machine, I should learn to build my own PC. He offered to hire me to do chores around the house to pay for the parts. This idea likely came from my dad's experience working on electronic components in nuclear submarines. Building a PC would support my interest in computers, provide a father-son electronics project, and help me learn to budget and bargain shop.

Thus began a multi-month odyssey going to popup "Computer Show and Sale" events throughout Northern California. I drew up a list of all the different parts that I needed for a working computer, and I bought them piece by piece over the course of several months. At the computer shows, I bargained with the vendors and tried to negotiate down the prices of the individual components. I bought a Pentium chip here, a couple of Taiwanese memory chips there, and eventually got everything I needed. 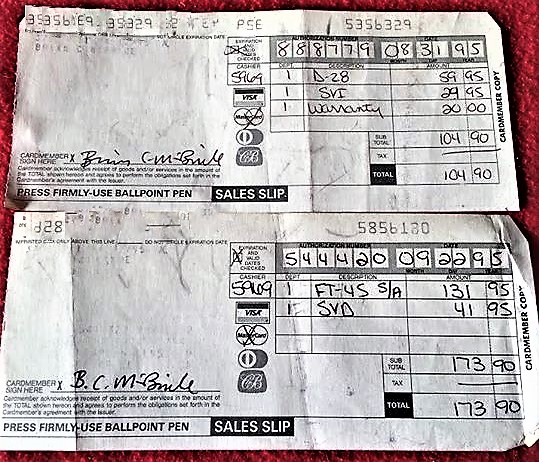 Receipts for parts from the Computer Show and Sale

I popped in an MS-DOS floppy diskette and a Windows 95 CD-ROM, and I got to work partitioning and formating the hard drive and installing the operating system. Once the system booted, I took a closer look at what else was on the CD, and noticed a video file. I double clicked, and Weezer's Buddy Holly music video started playing. Too bad I hadn't yet earned the money to buy a sound card!

View a video recreating this moment

Stay tuned for the next post to hear about how my computer obsession led me to fail out of seventh grade and later grew into a part-time job.

PreviousDon't run the Hercules Mainframe Emulator on your IBM laptop!
NextHow I got here: Chapter 1